The Final Report is now available and includes case studies following permission from the Local Authorities involved. The infographic below summarises our findings. 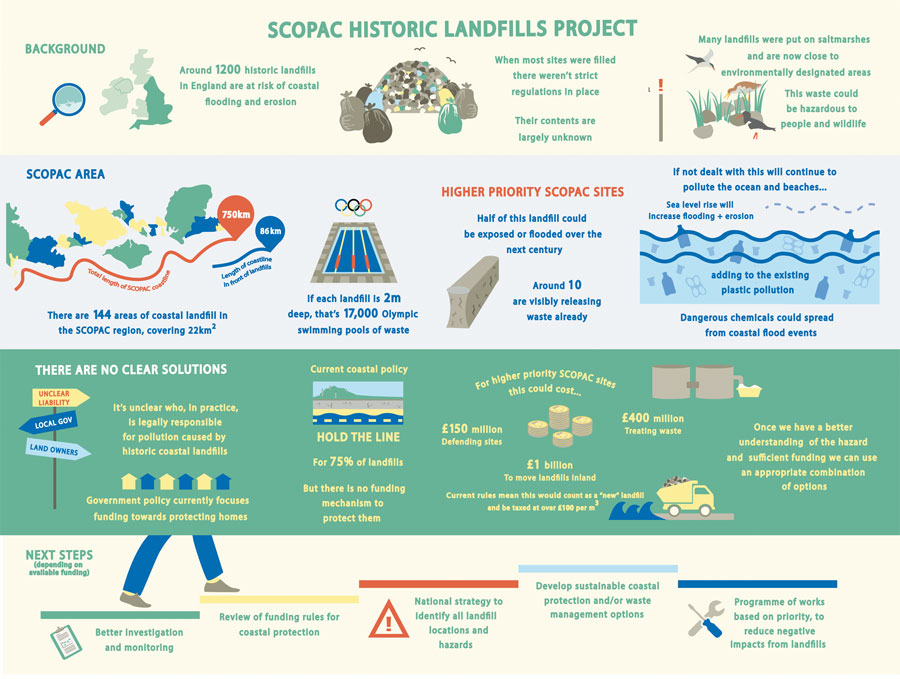 There are a number of old landfill sites across the SCOPAC region that have previously been protected from the sea, but are now eroding due to deterioration of the original protection, and are threatened by sea level rise.
The nature of the problem is long-term as it is likely that the landfill sites contain some of the early plastics. Given that these can take hundreds of years to biodegrade, it will be necessary to continue to contain the sites for the foreseeable future, as removal is unlikely to be a feasible option.

There is therefore a need for a long-term plan that is technically feasible and affordable. The Shoreline Management Plans and Coastal Strategies form the basis of this plan, however at present, as far as protection of landfill is concerned, they are aspirational as there is no appropriate funding mechanism. Given that the landfill sites are often undeveloped, they do not qualify for Flood Defence Grant in Aid funding.

This project builds upon previous work by the East Solent Coastal Partnership (ESCP) to identify landfill sites that are at risk of erosion and flooding. The C718 CIRIA Guidance (2013) was applied to confirm the distribution of hazard, consequence and shoreline responsibilities. This investigation has been extended across local authorities in the Central Southern England SCOPAC region where it appears there are many landfill and contaminated land sites with an unclear understanding of impacts, liability, or costs involved in resolving future problems. This is a national problem and the problem will get worse as landfill contents become increasingly exposed due to degradation of defences and linings, and due to impacts of climate change such as sea level rise. Vast quantities of waste are theoretically at risk of being released (into the sea and onto nearby land) which will pollute the marine environment and pose hazards to the public and wildlife.

The project primarily aims to raise the profile of this issue, particularly the apparent lack of funding and/or strategy to deal with the problem. The scope of the project is to identify coastal landfills at risk of flooding/erosion in the region, as well as the possible funding sources. The project is engaged in communicating this issue to the coastal engineering and flood management community, as well as politicians and other decision-makers.